Menu
Want to solve your pest problems fast?
Get Your Free Quote

It’s not easy to get rid of cockroaches, and maybe you’ve already tried several methods, but the problem persists.
You might be wondering: do sticky traps really work to eliminate roaches? Which are the best roach sticky trap? Let’s find out.

These are some of the best cockroach traps currently in the market. All of them are good, so the deciding factor would be your requirements.

It’s a cuboid roach motel, that comes pre-assembled. All you have to do is place it in a good spot. You can use it indoors or outdoors, as the trapped bugs can’t crawl back out of the motel.

The sight of roaches glued to a pad could be too gross, so using Black Flag TAT roach motel traps can be a good solution, as the caught bugs are enclosed and easily discarded.

The Black flag traps effectively control light to medium infestations. All the inner surfaces have an adhesive layer, so by just flipping it, you have an empty surface to collect more bugs.

It’s better to use the Black Flag sticky bug traps if you have kids or pets, as it’ll significantly reduce the risk of them accidentally touching the glue. There are other pet safe roach killers you might consider using when you have any pets at home.

This roach trap has a very faint odor. This is a good feature, as insecticides often have a repulsive smell, and some roach traps have a rather overpowering odor.

The Catchmaster 72MAX Pest Trap is a very power roach sticky pad. It can catch even rodents and geckos. This is a very strong pest trap that can be used for large infestations inside the house or in the garden. It measures about 5” x 8”, and it can be used as a flat surface or folded into a rectangular motel.

This is one of the best cockroach traps, even though it’s not specific for those critters. Its application extends to catching rodents, moths, fruit flies, and even reptiles. The glue is that strong.

The next step is disposing of the roach traps, once their surface is filled by roaches. This is a straight forward procedure, you can fold it over the insects, and just throw it in the bin. There’s no chance of them crawling out of the sticky bug trap.

The Trapper Max Glue Traps are well suited for small to medium infestations. The adhesive layer has a mild peanut butter scent that attracts a broad range of insects.

These roach sticky pads measure 5.25” x 7.75” with a glue-covered surface of 4.5” x 6.5”. There are 12 scented glue boards per package, which provides enough coverage for a whole house for a few weeks.

It has a protective cover that’s easy to remove, as compared to other models where the cover is much harder to peel off. This makes it very practical and quick to set up.

The sticky surface of the cockroach trap can be left flat, so it can be placed under the fridge or stove, or it could be folded into a box-shaped roach motel.

You might want to put the traps where they wouldn’t gather much dust, as that significantly decreases their stickiness, and they wouldn’t catch as many bugs.

What are the Glue Cockroach Traps?

A roach glue trap employs a brilliant method to eliminate cockroach infestations. It collects large numbers of bugs, and it can also control and monitor the spots where they’re abundant.

These roach glue traps use a simple idea, an adhesive layer is spread on a board, and as the bugs crawl on the sticky area, they’re trapped and eventually perish, or the whole trap is thrown away with the collected bugs.

The glue is coupled with a scented material that attracts the roaches, and so there’s no need to add bait or roach toast. The smell lures the cockroaches into the trap, and once glued in, they can’t escape.

Cockroaches are very adaptable insects. You might’ve noticed that the paste, insecticide, gel, or protective perimeter spray that used to work before, ceases to be efficient, and the critters keep on crawling confidently around your house.

That’s because they develop a resistance to the chemicals used in these insecticides. Using a mechanical method like sticky traps in catching roaches and disposing of them doesn’t have the same Achilles heel. It’s a simple solution that works.

The big question of how effective roach motels are can be answered simply by observing the number of cockroaches, spiders, rats, and lizards that get trapped in these sticky traps. There are effective indoors and outdoors, with light to heavy infestations of roaches. 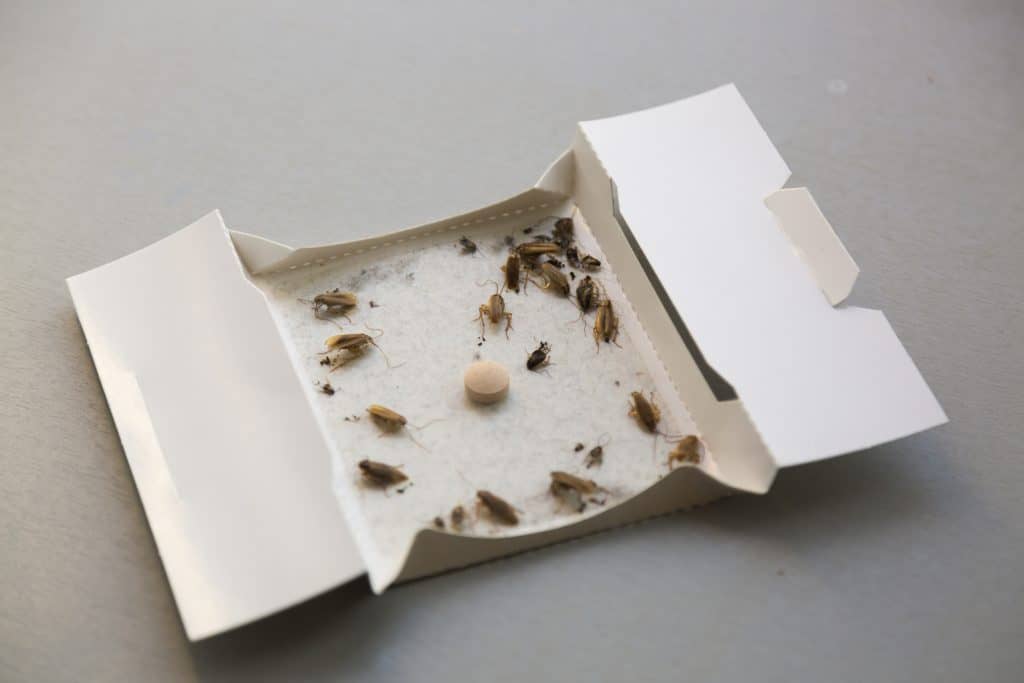 What are the Advantages of Using Roach Traps?

Roach traps aren’t the only solution for eliminating bugs. There are several alternatives, and here I’ll take a closer look at some of them.

Roach killing bait stations have poisonous insecticide that the roaches carry back to their nests thus eliminating more critters. The downside is that it contains toxic substances and it’s ineffective on larger cockroaches.

Spray insecticides are great for the roaches you see, but the problem is always in the ones you don’t, and so the problem remains, in addition to the chemical content of these sprays.

Chemical aerosol products include the perimeter spray variety, which is longer lasting, but hazardous to children and pets, and occasionally the sprayer nozzle fails and needs to be replaced.

Gel bait is quite effective (for example Advion Gel Bait reviewed before), but you need to apply it very near to the infested spots, and in all the places they frequent.

All the above-mentioned methods end up with dead roaches all-around your house. This isn’t the case when you use a cockroach glue trap.

The bugs are all glued to the roach sticky pads, and disposing of them is cleaner and simpler. They’ll also be effective for weeks once laid in place. Unlike an insecticide spray which only lasts as you apply it, and it’s much less of a hassle to set up like gel bait.

Glue traps for roaches are also less of a hassle to set up, and they come with an appealing scent to the bugs, so you don’t have to load them up with bait. All you have to do is find some strategic spots and set a cockroach trap.

It’s also a mechanical process that doesn’t include using any chemicals. I prefer eco-friendly solutions whenever possible. 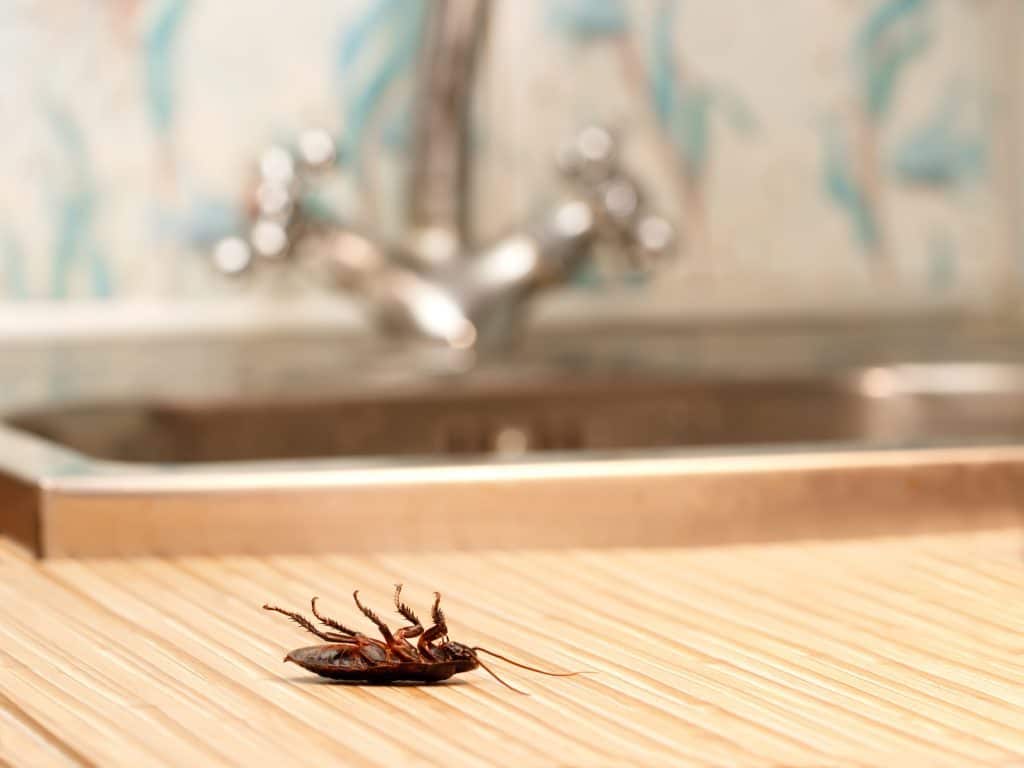 Where Should you Place the Roach Sticky Trap?

Cockroaches are nightcrawlers that sneak out for feeding when you can’t see them, but they leave a trail of excrement behind them. The living room and kitchen are among their favorite locations.

Food disposal attracts roaches, so around trash cans is another good spot for placing a sticky bug trap. Bugs are attracted to water, so place a roach glue trap beside the pipes, and around your pet’s water bowl.

Cars too are places where roaches are known to breed. There’s an incident I came across of a guy driving on the highway, and as he turned on the A/C tens of roaches flew out of the vents.

Using roaches sticky traps is effective, clever and clean. It’s also a safe and budget-friendly method to get rid of these unwelcome critters.

The three products reviewed here are all good, but my personal favorite is Catchmaster 72MAX Pest Trap as it’s the most powerful of them, a crawler that passes by the roach motel would never leave.

It’s also versatile, so you can use it as a flat trap, which you can slide under the fridge, or fold it into a rectangular box to minimize dust collection, and to make it less accessible to pets.

Get licensed professional pest control specialist onboard. Click below to get your free instant price quote.
Get Your Free Quote

Important Disclaimer: The information contained on PestProper.com is intended for informational and educational purposes only. Any statements made on this website have not been evaluated by the Environmental Protection Agency (EPA), the Food and Drug Administration (FDA) or any other regulatory body. Any information or products discussed for remedy, exterminate, treat, or prevent any insect or rodent infestation must be used according to the product instruction included by manufacturer. Please consult a licensed exterminator before using  pesticides or insecticides in or around your household.